I have added a new program to be downloaded for free from http://www.eliasen.eu/DownloadSoftware.aspx.
This time it is a program to help you do two things:

I have had the need for a small utility to do this several times, in case a customer
has some XML, and they want to know if the XML is even valid. The check for well formed-ness
can be done by simply opening the file in Internet Explorer, but that is just soooo
slow for large files. I tried a 70MB XML file once. It took IE a couple of hours to
open it and tell me what was wrong with the XML. My utility did it in a few seconds. 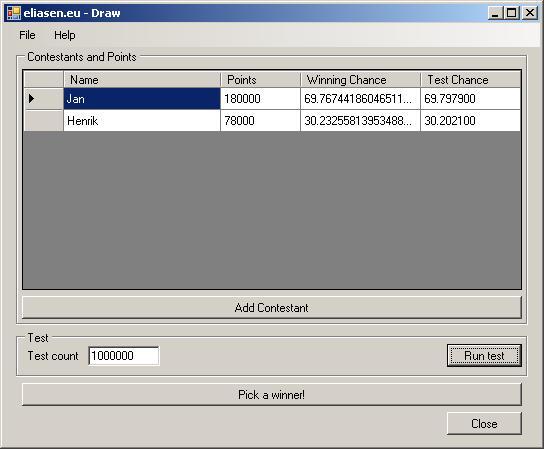 At Logica we often participate
in different events where employees compete to see who rides their bike more often
to work, who walks the most steps in a month, and so on. After a month of competition,
we end up with a spreadsheet, where I may have walked 180.000 steps, but my colleague
Henrik only walked 78.000 steps (He is kind of a wimp 🙂 )

Therefore, I have written a small winforms program, that helps you manage this. You
can add as many contestants as you like, and give them points. If you are only interested
in a “normal” draw, you can just give all contestants one point.

The program not only does the draw, it will also:

I hope this comes in handy to someone.

I am using http://www.last.fm to keep track of what
I listen to, and to get inspired to listen to some new music that I didn’t know I
liked.

Anyway, the point of this blog post is, that it seems that I am currently the top
listener of Baal:

Baal have a web site at http://www.baalworld.com –
try it! 🙂

It is time for the third posting in my series about using BizTalk to integrate to
Excel spreadsheets. My first two postings are here (Installation)
and here (The
schema generation wizard).

This third posting is a talk about the runtime, and how it works.

To start out, I have done a simple test, and you can find my project

It has a simple spreadsheet and a schema for this spreadsheet (both
are described in my previous post) and the setup basically just has a FILE Receive
Location and a send port with a filter that takes everything from the Receive Port
the Receive Location belongs to. My aim is to see how fast the Spread Disassembler
is.

First, a short description of my setup:

My BizTalk installation is in a Microsoft Virtual PC 2007 virtual machine.

The host machine is a Hewlett Packard 8710w laptop with an Intel Core Duo T7700 2,4GHz
CPU, 2GB of RAM and Windows XP Professional Service Pack 3 and completely updated
as of 7’th December 2008.

The guest system is a virtual machine which has one 2,4GHz CPU, 1GB RAM and Microsoft
Windows Server 2003 R2 Enterprise Edition SP2 – also completely updated as of 7’th
December 2008.

I created 999 copies of the same spreadsheet and moved them into a folder watched
by the receive location. They were read, transformed into XML, and output into the
output folder in 3:19 minutes. This is an average of 5 spreadsheets per second.

This took me by surprise – I had expected it to be faster. So I decided to do things
more academic than looking at the time stamps of the output files. After all, there
are PLENTY of functionality that could be the time consumer. So I created a BAM Activity
and View, tracking when my Receive Port starts and when it ends.

A table showing the average processing time can be seen here:

So it is pretty clear, that performance drops drastically when the load increases.
I do not blame this on the Spread Disassembler, though. Since this
is a virtual PC, with SQL Server on the same box as BizTalk, the mere I/O operations
when writing all the output files to the hard drive conflicts with the I/O operations
of BizTalk using the MessageBox. I find this a much more likely issue for the drop
in performance than that the disassembler should get slower just because more messages
come in.

So, to sum up, it seems that the Spread Disassembler can take a pretty heavy load
– Up to 2643 messages per minute (44 messages per second). This is given less than
ideal operating and hardware conditions, but optimal conditions with regards to the
BizTalk Server not doing anything else at the time.

Maybe in a later post I will take a look at more complex spreadsheets/schemas and
also test the performance of the assembler.

Blog went down the nasty way…

The company hosting the eliasen.dk domain went bancrupt last friday (19’th December
2008), and I only just found out this morning (Monday the 22’nd December).

So basically, everything since my last backup (27’th November 2008) is gone!

Right now, I am trying to setup the blog on the new server and trying to see if I
can repost the blog posts I have written since the 27’th November.

With all the developer extensions in recent time around SharePoint (Features, Solutions
etc), I’ve found there seems to be a few little known and little used ‘other’ APIs
within the SharePoint space.

We’ve got things like WebServices and the SharePoint Object Model (SPSite etc) that
we use however, there’s a couple of other APIs that could be useful also for the times
when you’re not running locally on the SharePoint machine – they generally center
around HTTP and extending it.

Two (that come immediately to my mind) are:

2. RPC (over HTTP) APIs – Front Page and SharePoint Designer still use these.
(InfoPath when submitting forms uses this to promote properties to a forms
library)

A great example of this is SharePad
for SharePoint on CodePlex

How to look cool at work…. Stick this poster by your desk, people will walk past
and say “Hmmmm……” – guaranteed to reduce the amount of questions you get each
day 🙂
(Then you could start talking about the ‘flux capacitor’ and people will believe……)

I'm excited to announce that we have now listed our new "Dublin" course on the website.  This will be a three day course where we dive in to taking advantage of the hosting features found in the new application server being developed at Microsoft.  If you are interested in finding out how you can use "Dublin" to host your WCF/WF services, manage and monitor them, and take advantage of advanced features for routing, versioning your services, etc. then this is the course for you.  I'm looking forward to the first public offering which should be posted up on the schedule soon.

THe business rule engine in Windows Workflow Foundation is an often overlooked feature that provides powerful business logic processing and rich business rule engine execution semantics.  Some mistakenly believe this functionality can only be used from within a workflow.  I worked with Microsoft recently on a couple of articles to provide developers  hands-on examplesof using rules in .NET applications and in WCF services.   These articles are part of a new series intended to provide small concrete examples of how to use the technology.  You'll find links in the sidebar to other articles on using sequential and state machine workflows.  If you are learning WF , don't forget about our screencast series as well where we have information on WF, WCF and more.